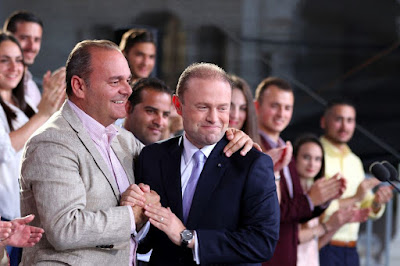 The cashiered former Prime Minister of the Republic of Malta has quietly traveled to Dubai, UAE, in the company of another corrupt former Maltese official, ex-Economic Minister Chris Cardona. They stayed opposite Noor Bank (remember its role in the illegal payments ?), on Sheikh Zayad Road, according to our reliable sources.

The purpose of their trip is unknown, but there are a number of law offices and banks in the area. Muscat went to great lengths recently to deny that he is relocating to Dubai shortly, reportedly to take a CEO position in the catering industry, due to a new business created especially for him in the UAE, by a hotel  located in Malta. It is rumored to be a high-paying "no show" job, whee he will be receiving a handsome salary, but will have no executive responsibilities or duties. Whether he is being given this unusual job is  the return of favors he extended to the Malta company, and its owners, while Prime Minister, will certainly be a subject for investigation by Maltese authorities in 2021.

Muscat, like another controversial national leader, is rumored to be planning a holiday trip abroad, from which he will curiously not return, leaving Malta while it is preoccupied with New Years' events.