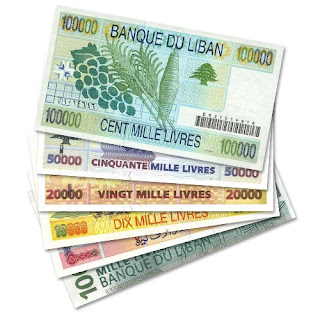 Fearing that US sanctions will be imposed upon more banks in Lebanon for providing financial services for Hezbollah, in the aftermath of the JTB Bank scandal, many Lebanese have been drawing their money out of the banks, in US Dollars, causing the exchange value of the Lebanese Pound to decline around ten per cent against the Dollar. Additionally, a parallel market has emerged for trade at this unofficial exchange rate, which is troubling, though the Pound appears to be stable at this time.

Obviously, the currency of preference is not the Dollar, as a hedge against Pound value decline. One source claims that cash, especially foreign currency has become difficult to obtain in some locations, though government has denied it. Allegations that some of the cash is going to Syria, which is under major US and international sanctions, have been made.

Reports from Lebanon estimate that $2.5bn has been stored within the homes of Lebanese who are uneasy about the increased threats to their banks, due to the threats that more local banks will be sanctioned by OFAC for terrorist financing, forcing their closure or liquidation, due to the inability of sanctioned entities to access the US banking system.

Hezbollah agents in particular were ordered to obtain cash from their banks, leaving us to conclude that Jammal Trust Bank SARL was not the only Beirut-based financial institution servicing Hezbollah, so expect further OFAC actions against Lebanese banks, or foreign banks operating in the country.

There will also be sanctions against non-financial Lebanese targets, as an Assistant Secretary of the US Treasury visiting Lebanon recently warned that entities and individuals otherwise providing support to Hezbollah will also be sanctioned, which threatens Hezbollah's political allies, who are supporting the global terrorist organization in other, non-financial, ways. How far this expanded US Treasury policy will go is not known, but political parties allied with Hezbollah are definitely at risk.