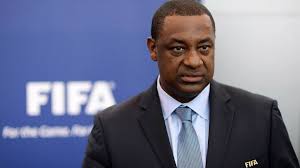 Legal observers, who were eagerly anticipating the sentencing of convicted FIFA Vice President Jeffrey Webb recently, are still trying to figure out what on earth is going on with his case. Webb's attorneys reportedly were able to secure a highly unusual tenth postponement of his sentencing date, in this case, all the way to March 2020, but there was no press release or other indication as to why he is allowed to evade sentencing for five years. What's wrong with this picture ?

Webb entered a guilty plea way back in 2015, and he has been living in the United States, with his American wife, in a house bought with the proceeds of crime, under House Arrest (Home Detentio) since that time. Obviously, the early delays in his sentencing were requested by the US Attorneys handling his case, to allow him to provide what is known as Substantial Assistance, meaning he be available and prepared to testify at any trials of other corrupt FIFA officials, or those who bribed them for monetary gain, Now, however, the FIFA case appears to be over, and unless there is a pending investigation, so many years later, that will survive a Statute of Limitations defense, what's left to do ?

Is Webb the beneficiary of some sort of backroom sweetheart plea arrangement that his attorneys were able to wrangle out of government prosecutors, which, if made public, will embarrass them ? The public wants to see justice done, and justice delayed is justice denied. Additionally, down in his native Cayman Islands, where Webb faces not just one, but two serious criminal cases unrelated to the FIFA bribery scandal, Caymanian prosecutors are anxious to obtain convictions against him. Unfortunately, so long as his US case is pending, he is not going to face the music at home.

There are concerns that deserve public attention:

(1) Do prosecutors have an unrealistic expectation that Webb will still deliver evidence against a yet uncharged big fish in the FIFA case ? Sentence the defendant, let him commence his prison time, and give him a Rule 35 sentence reduction down the road; don't give him a long-term pass on starting his sentence. This man facilitated a culture of corruption that cost the world's football (soccer) fans more money to attend World Cup events, due to the obscene bribes and kickbacks paid to senior FIFA staff, which payments were factored into ticket prices, the cost of official souvenirs, and other hidden costs.

(2) Given the fact that all the details of favorable Federal plea deal are often quietly kept from the public and journalists, who must ferret them out from court records, is there something important here that needs to see the light of day ? For example, though Federal case law generally excludes Home Detention from credit towards jail-time, but what if there is such an understanding with Webb's attorneys ? By the time Webb is actually sentenced, he will have have six years of house arrest. Will he simply be sentenced to "Time Served," meaning crediting his house arrest time towards a lenient sentence, and evade any Federal prison time?

Federal prosecutors often obtain long prison sentences for offenders, and then quietly ask the Court to reduce that sentence later, after Substantial Assistance is rendered, but there is no press release notifying the public of this event. Does Jeffrey Webb have some sort of deal that the public might not appreciate, given the severity of the corruption charges against him ?