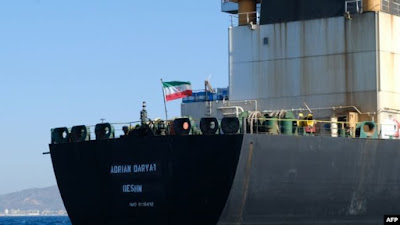 The written assurances that the Government of Iran gave to the authorities in Gibraltar, that the crude 2.1m bbl. oil cargo carried on board the tanker Grace 1 was no longer destined for the sanction refinery in Syria, turned out to be worthless. The tanker, now ex-Panama, has been reflagged as Iranian, and renamed the Adrian Darya 1, turned off its transponder, just off the coast of Syria, its purported Turkish destination merely a fiction. Iran has a problem with truth when it comes to oil sanctions evasion; it also stated that the cargo was sold, meaning that a transfer on the high seas may be the next step in covering up its arrival in Syria.

The Office of Foreign Assets Control (OFAC), on August 30, 2019, sanctioned the vessel, as well as its Captain, AKHILESH KUMAR (DOB 15 June 1976), as SDN and Specially Designated Global Terrorist (SDGT), due to the cargo's reputed ownership by the Islamic Revolution Guard Corps (IRGC).