IRANIAN OIL TANKER ANCHORS OFF THE SYRIAN PORT OF TARTUS 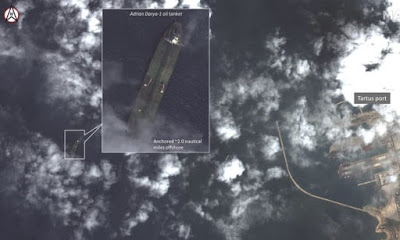 Notwithstanding the sworn statement, given to British authorities in Gibraltar, that the crude oil tanker it seized for EU sanctions violations was now NOT going to Syria, which resulted in its release, here is the tanker, ex-Grace 1,  now known as the Adrian Darya 1,  sitting just off the coast of Syria, at the port of Tartus. The vessel turned off its transponder after it passed Cyprus, to foil any country that was tracking its journey.

The profits from the sale of the oil will be going directly into the pockets of the Islamic Revolutionary Guard Corps (IRGC). This is a clear example of terrorist financing. That is why the United States was so intent upon seizing the vessel and its cargo.
Posted by Kenneth Rijock at Sunday, September 08, 2019