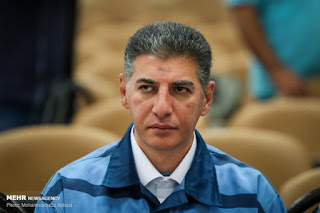 Alireza Monfared, who, in concert with a group of Iranian oil sanctions evaders, participated in the theft of billions of dollars of his country's illicit oil profits, and who has been in Iranian custody since January, 2017, appeared in public, recently, for the first time. He is wearing the blue prison uniform issued in Iran's notorious Evin Prison. The other high-profile sitting next to him has not yet been identified, but could be a co-defendant in the same case, which also is believed to include Reza Zarrab and Babak Zanjani. It is popularly known as the Oil-for-Gold scandal. 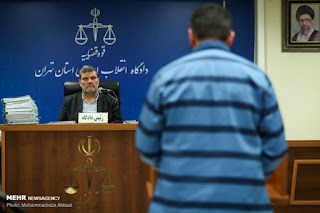 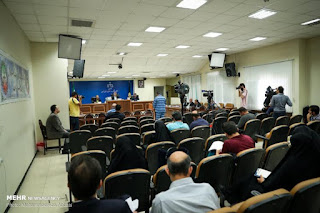 Monfared, as seen from these pictures, is appearing in open court in Tehran. Note the presence of news photographers. We wonder how this news is being treated in Dominica, where Monfared's high-profile business fraud,  and his Dominica diplomatic passport, exploded when he was detained in the Dominican Republic, by Iranian agents, and transported to Iran, Via Havana and Moscow. Monfared's very public relationship with Dominica PM Roosevelt Skerrit remains a major embarrassment in Dominica. 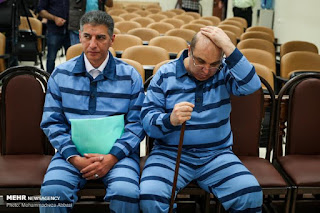 The defendant most likely faces either life in prison or, like Zanjani, the death penalty, unless he surrenders the missing billions. Zarrab, who is cooperating with law enforcement or intelligence authorities in New York,  may have already withdrawn some or all of the funds, in a settlement with the United States.
Posted by Kenneth Rijock at Monday, September 16, 2019