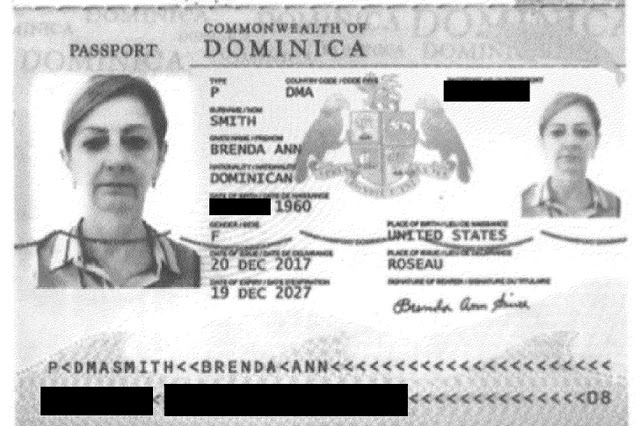 This is Brenda Ann Smith* a Philadelphia-based accountant-turned hedge fund manager who, when faced with a multimillion dollar loss, became a Ponzi schemer with her clients' $105m. Now under a Federal indictment, and in the custody of law enforcement, $63m of investors' money remains unaccounted for. Where is all that stolen money ?

Although the exact location of the missing funds is not known, Ms. Smith, when faced with funds shortfalls in the future, the dilemma that faces all Ponzi schemers, who pay off old investors with new investor money, she turned to the Commonwealth of Dominica to assist her. Specifically, the country's Citizenship by Investment, or CBI, program, which alloed her to purchase a citizenship & passport, which appears above, in 2017.

Next, Smith used the Dominica passport, and not her own US identity document, to travel to a number of offshore financial centers, including but not limited to, The United Arab Emirates and the Netherlands Antilles, where it is believed she hid the majority of the stolen wealth. One source stated that only $2m has been recovered.

The real question here is how Dominica, which alleges that it performs due diligence investigation upon all CBI applicants, approved Smith for a CBI passport. Even the most rudimentary checks on the Internet showed that she had problems which marked her as high-risk, and unqualified to pass any check, and her issues were apparent to anyone who employed a Google search. In Dominica, everyone gets approved for that prized CBI passport.

This is further confirmation that, in Dominica, money talks, and trumps compliance, and white collar criminals get approved for a passport, so long as they can afford to pay the costs & fees (and bribes) charged by the Citizenship by Investment Unit. We do not not know how much additional cash ends up in the pockets of senior government officials, but it is said to be substantial.