If you ever wondered why we often publish FBI Wanted posters on this blog, here's why. Greek authorities have announced the arrest of a Lebanese terrorist, identified by local media as Mohammed Ali Hammadei, the Hezbollah hijacker of Trans World Airlines Flight 847 in 1985. During the hijacking, an American US Navy diver, Robert Stethem, was murdered, after he was identified by his passport; after this incident, the State  Department changed the way it issues passports to US servicemen. 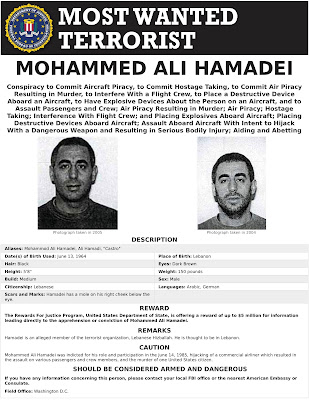 Ali Hammadei has been on the FBI Most Wanted Terrorist List since 2001; the reward offered is up to five million dollars for information leading to his capture. He faces multiple terrorist charges in the United States.
Posted by Kenneth Rijock at Saturday, September 21, 2019