US TELLS HAITI IT WILL CUT OFF MONEY TRANSFERS IN NOVEMBER, IF NO REFORMS TAKEN 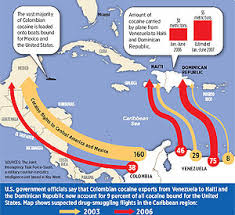 It is completely missing from mention in the American press, but the Republic of Haiti has hit the panic button, after a reported warning, from the Obama Administration, that it will end all money transfers from the US to Haiti, in November, 2016, unless certain unspecified "corrective measures" are taken.

Many Haitians have, for decades, been largely supported by remittances sent by expats, working in America, to their needy families in Haiti, but that route is also used to repatriate the proceeds of narcotics crime, and apparently the United States has lost patience with the Haitian financial industry's non-existent AML/CFT efforts. Most North American compliance officers are  ill-informed about the thriving Venezuela-to-Haiti-to USA drug trafficking route, believing Haiti to be an extremely poor country, and not understanding its key role in drug smuggling and money laundering operations.

The level of corruption in Haiti is considered by many experts to be the highest in the Western Hemisphere, and the participants have a vested interest in keeping their financial structure deaf, dumb and blind, regarding protection from financial crime, so unless the United States backs off, Haitians living in America could lose a large part of the resources that they depend upon to sustain their unemployed relatives at home. Will the American threat work ? We shall see on November first.