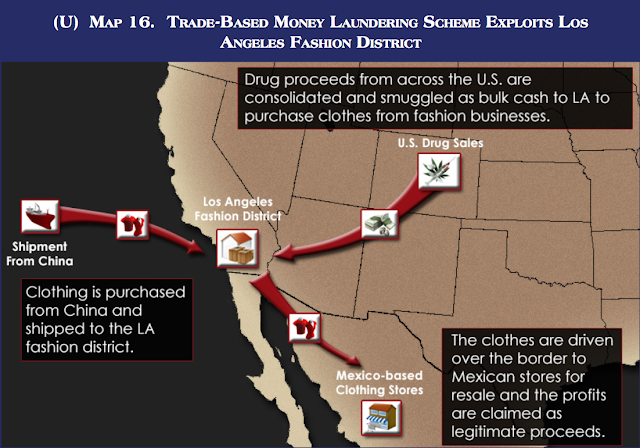 The method, you have to admit, is clever. You have US Dollars, a drug profits earned in the Continental United States, and you must repatriate those profits, and turn them into Pesos, in Mexico, where one can not longer easily convert currencies. Can it be done ?

Here is the technique, a rather unusual take on trade-based money laundering:

(1) The Mexican Cartels transport their dollar profits to the Los Angeles Fashion District, where they purchase, for cash, large quantities of clothing suitable for retail sale. This answers the question many people always asked: why are bulk cash smugglers always going to California, instead of the Mexican border, with their deliveries ? You now have an answer for some of that cash.
(2) They ship the clothing, in bulk, into Mexico; it is exported free of duty, due to NAFTA.
(3) The clothing is thereafter sold in trafficker-controlled stores in Mexico, effectively laundering the drug proceeds, and, more importantly, turning it into perfectly usable Pesos. The drug trafficker has now defeated the Mexican Government's ban on Dollar-Peso conversions, through retail sale.