DOCUMENT PROVING THAT RYAN BATEMAN TRANSFERRED $95m, STOLEN FROM VICTIMS, TO THE BAHAMAS

In light of the fact that the Cayman Gang of Four ringleader, Sharon Lexa Lamb, has repeatedly alleged that the total of the accounts, at Dundee Merchant Bank, never exceeded $5m, attached hereto, and made a part hereof by reference, is a $95.5m transfer, of registered securities, from Dundee, sent to Weiser Asset Management, in the Bahamas.

Obviously, this represents client assets, transferred without authorization, out of the victims' accounts at Dundee, in violation of several Cayman banking laws, as well as being a criminal act. CIMA originally estimated the losses at $450m, if not higher, but Lamb insisted that no such funds existed in  Dundee Merchant Bank. Dundee officers illegally co-mingled client funds, while Lamb falsely assured them that their money was held in individual accounts, by name, at Butterfield Bank. 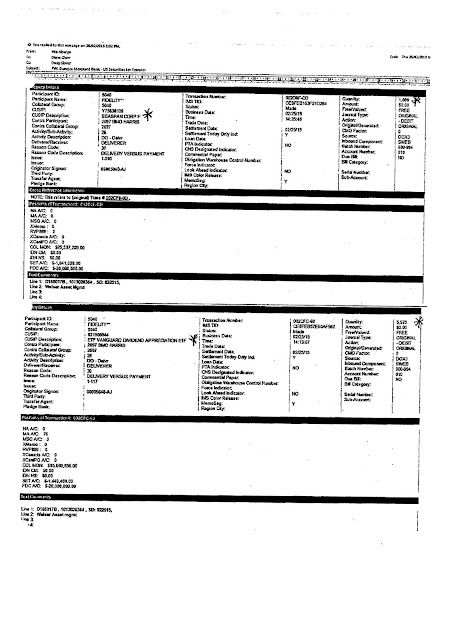 Bateman's corporations, B & C Capital, Ltd., and Bateman and Company, Ltd., looted funds from the victims at Dundee, which was a brass plate bank, without actual deposit and safekeeping facilities. Dundee placed its clients' accounts in the Bank of Butterfield's Cayman Islands branch, and Lamb transferred funds to Bateman, from those accounts. The transfer date appears to be 25 February, 2015, when Lamb was the Senior Vice President & Director, and Derek Buntain was President & Director, respectively, of Dundee Merchant Bank. As such, they are both strictly and individually liable for the theft, jointly and severally with their employer, Dundee Merchant Bank.
Posted by Kenneth Rijock at Friday, August 19, 2016