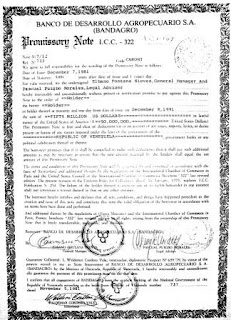 After twelve years of protracted litigation, A US District Court in Ohio has directed a judgment in favor of The Bolivarian Republic of Venezuela, in a case where the plaintiff sought to recover upon two $50m promissory notes.A demand for payment had been made upon these obligations, which were allegedly executed by Banco de Desarrollo Agropecunario SA (Bandagro), a defunct financial institution whose obligations were assumed by the Government of Venezuela.

For years, the controversy over the provenance, and validity, of the promissory notes, made the rounds of Western Hemisphere investment circles. Was this a golden opportunity, and were the notes not authenticated by the highest legal official in Venezuela ?

In a 101-page opinion, the District Court ruled that the evidence showed that the signatures on the notes were not authentic, and that the plaintiff, an American investment company that purchased them, failed to rebut that evidence, notwithstanding an opinion by Venezuela's Attorney General, attesting to their validity, which was later reversed, and that the plaintiff probably knew about the defects.

The Court, after an extensive discussion which should be of interest to legal scholars for years to come, determined, as a matter of law, that the plaintiff was not a Holder in Due Course*, under the Uniform Commercial Code,, which would have qualified them for payment, notwithstanding their fraudulent issuance.