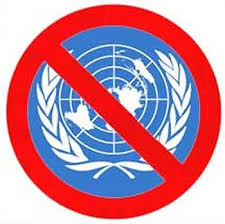 We have, in the past, warned our readers that, due to the agendas of some of its non-democratic member countries, United Nations findings of fact, in its documents and white papers, cannot be relied upon to be accurate. Now, things just got even worse: an engineer, working in Gaza, for a UN relief agency, has been arrested in israel, and charged with assisting Hamas, a globally designated terrorist organization, and the UN has, amazingly demanded his immediate release; here's why.

In a press release, regarding Waheed Al-Borsh,  the United Nations astoundingly claimed that their employee was "entitled to diplomatic immunity from prosecution, connected to acts he committed while performing his duty." How on earth is a non-diplomat, working as an engineer, entitled to diplomatic immunity, under international law, or the UN Charter ? Al-Borsh diverted UN funds to build a naval base for Hamas, and he saw that reconstruction money was exclusively used to rebuild homes owned by Hamas terrorists, that were destroyed in the 2014 war with Israel.

Has the United Nations now taken the side of terrorists ? If we were to follow the logic of the statement, all the UNRWA employees in Gaza, 95% of whom are Hamas agents, are diplomats ? When the United Nation seeks to protect a terrorist, the UN loses all credibility as an independent, neutral international organization, dedicated to peace, and becomes merely a spokesman for supporters of terrorism. It is fast becoming irrelevant in the 21st century.