THE POPE'S VISIT TO MALTA MUST BE CANCELLED 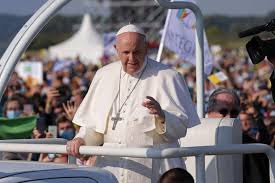 The Pope's impending visit to the Republic of Malta on 2 and 3 April should be canceled at all costs. Although the Pope's visit is scheduled for after the general election, this date is far too close to the March 26 election date.  Consequently, should the visit proceed, the Pope’s reputation will be irreparably compromised, and needlessly harmed.  The reason being that the Robert Abela’s Socialists – who are expected to win the elections with a clear majority of the popular vote – will use the Papal visit to gain maximum political mileage for themselves.

One ought to bear in mind that with elections being held just one week prior to Pope Bergoglio’s visit, the weekend following the announcement of the elections result is traditionally reserved for public victory celebrations by the party declared the winner.  There is every possibility that the large crowds expected to attend the Papal open-air Mass to be held in Floriana, a suburb of the capital city, could be exploited to celebrate Abela’s victory as a show of “national unity” before the personage of Pope Bergoglio.

Robert Abela ideally would not wish to cancel his party’s election victory celebration spectacle.  He could, however, transform his party’s victory mass meeting into a show of force on the Floriana granaries during the Pope’s visit, by urging his supporters to attend the Papal Mass in droves.  Hence this strictly religious event could well be manipulated by teeming thousands of Labour supporters waving Maltese, Vatican and LGBT flags.  From his vantage point at the papal altar, Pope Francis could well be taken in by such a spectacle.  Like the Pope in Solovyov’s A Short Tale of the Antichrist, Bergoglio could thus be fooled into regarding Robert Abela as the great unifier of all the Maltese, the great leader who brought peace to the nation, the peacekeeper between rival factions uniting Nationalists and Socialists, believers and atheists, whites and blacks, Maltese and immigrants, straights and gays under world peace.  Abela would thus be remembered as the only Prime Minister who sacrificed a purely partisan political event in favour of a national religious function presided over by the Pope no less.  Abela and his party would thus have everything to gain if he employed such tactics.

On the global stage, this would also help to clean up the Maltese government’s international image in the wake of one corruption scandal after another.   Most important, this would enable Robert Abela to boast to his fellow freemasons, even those abroad, that he succeeded in making Jorge Bergoglio into their trophy.

Joseph Muscat should take note of this.  He had always dreamt of being remembered as the just and honorable man that brings peace to the whole of humanity – remember the good old days of CHOGM in 2015.  He has not understood that the inner circle of the nefarious cabal he had joined has merely changed its tactics on how to eliminate him, fooling him that he is still one of them.  Even the bishop who once said that Muscat is a man who keeps his word will trick him to save his red hat just as the new EU parliament president tricked her folks to advance her career.  Now, only Muscat’s grassroots can save him and his wife Michelle from an eternal damnatio memoria in Maltese history books, or worse, incarceration in Malta or abroad.  The Americans know that this international cabal is powerful.

Joseph Muscat’s days are numbered and the only dinghy that can save him from political drowning is the Labour grassroots that sincerely  adore him as a God. Only the Labour grassroots that are honest can and should be trusted by Joseph and Michelle to protect them from the sinister cabal that rules Malta behind the scenes.   It is doubtful whether Joseph has the courage to do this, or is clever enough to understand how he was outmaneuvered. He is so afraid, and fear is the little death that brings total obliteration of the ability to discern reality.    Perhaps his wife Michelle Muscat has the intelligence and the guts to defy the Maltese hidden cabal, that despite getting rich in her husband’s era, is now so unjustly ungrateful to him.  She can still call their bluff by demonstrating to them and to the world that in the island Republic of Malta it is the people who rule and not the greedy capitalists pulling the strings of puppet politicians.  We’ll wait and see … time is running short.

Meanwhile, Malta’s archbishop Mons. Charles Scicluna should have enough intelligence to uncover this ruse, assuming he really desires the spiritual welfare of the Maltese nation.  Any local religious leader worth his salt should immediately request the Vatican to cancel Bergoglio’s visit to Malta forever, and distance his holiness from Maltese partisan political shenanigans.  Then again, given Mons. Scicluna’s very cozy rapprochement with Malta’s socialists, it may be too much to expect the pastor of the Maltese church to place purely religious considerations above all else.  This is especially the case as Scicluna is being tipped for a cardinal’s hat and a top appointment in Rome.  Indeed, there is every indication that the last thing Archbishop Scicluna would want is to rock the boat and delay a visit to the Maltese Archdiocese by his boss.

In this respect, Maltese Catholics ought to boldly overlook Scicluna, and immediately write directly to the Pope, and filially ask for the visit to be cancelled.   It ought to be made clear to the Holy See that if this visit proceeds according to the April 2-3 scheduled programme dates, the most corrupt government in Europe will exploit the occasion to advance the Maltese Labour regime’s agenda and popularity.   Hence, the religious connotations of the visit will thus be completely obscured for partisan purposes.  No Pope should allow himself to be so shamefully exploited.

Maltese true Christians ought to remind his holiness to read Vladimir Solovyov’s A Short Tale of the Antichrist and the various references to it by his predecessors by that Saint who demolished the Soviet evil empire – Saint John Paul II.  Even Benedict XVI repeatedly quoted Solovyov, and Ratzinger is probably one of the few true friends of Bergoglio left in the Vatican.    The Bavarian Pope, attacked by the German Church, will tell the present Pope how many times wolves dress in sheep clothes and that sometimes even a butler can be your traitor.

Consequently, Jorge Bergoglio could follow in Pope John Paul II’s footsteps.  During the Karol Wojtyla pontificate, the then Vicar of Christ never allowed himself to be exploited by local heads of state, politicians, or other dignitaries during his frequent visits to Catholics all over the world.  While the long hand of the cabal that rules Malta still reaches far and wide in this country and the whole world, this is not the time for political naivete on the part of the local Church or the Holy See itself.   The situation is not desperate – in the end the Immaculate Heart of Mary will triumph.