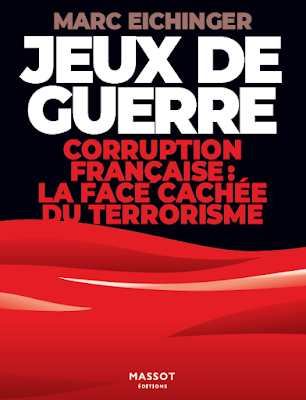 Thanks to Marc Eichinger for sharing this material from his new book:

To be published today, March 17, the book "War Games: French Corruption, the Hidden Face of Terrorism" alerts the reader not only to the role played by Qatar in the wars in Libya and Syria, but also on the role of two listed companies Lafarge and Rubis. Lafarge and its managers, who have not yet been judged and are presumed innocent, are accused of having directly financed ISIS to protect its cement plant. The legal proceedings are well advanced but not yet set for trial.

France is the European country which has the least number of government prosecutors and clerks ( only 3 per 100 000 people against 11 as an average in the European Union). Through the European Commission for the Efficiency of Justice (coe.int), the Council of Europe has already widely sounded the alarm globally. French justice is unfortunately totally neutralized by its lack of means. International cases are not completed there for 15 to 20 years. The bankruptcy of the judicial system encourages the strong development of corruption, which no longer has any significant obstacles to success..

As for Rubis, a preliminary investigation has been launched and the company appears to have played a key role in the export of ISIS oil via the oil terminal it built at Dortyol on the Turkish coast. The book reports that without this major infrastructure ISIS oil could not get onto tankers, depriving the terrorists of 80% of the revenue. Downstream, two Italian prosecutors and the Italian financial brigade had the courage to track down 52 shipments worth $1.2 billion. In two years of investigation, the Italian police have done a remarkable job. In France, nothing, the victims of the Paris attacks are only entitled to the trial of petty executors. Isis exported its oil by the “act of God”.

Rubis is a listed company that is present in 41 countries having very high risk, including a monopoly in Corsica in the field of storage and gasoline distribution. It is also present in Haiti with 133 gas stations. In its annual report, Haiti is only “a country with fragile governance”.

Rubis shows a totally debt-free financial position, positive cash flows everywhere and declares its humanitarian action to the point of wondering if it is not an NGO,, yet its stock price is falling and if it has no debt despite zero interest rates, it may also be because its profile does not pass bank compliance.

(The author of the book, Marc Eichinger, is well known to many intelligence agencies, and his reputation in the fight against corruption is well established. Like Daphne Galizia, he is tackling a very dark period in the oil industry. He is sufficiently protected not to suffer the same fate.)