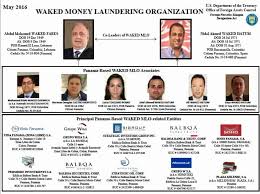 If you were wondering why the Eleventh Circuit Court of Appeals has not yet ruled in the Government's appeal of an adverse ruling regarding forfeiture in the Nidal Waked Hatum case, you are no alone. Since Oral Argument was heard on February 11, there has been no court activity. The District Court judge declined to enter the $10m forfeiture order that the Government wanted after the defendant took a plea in Miami, and argued on appeal that the entry of a forfeiture judgment was proper.

The defendant has already served his sentence and returned to his native Panama; he was not convicted of the more serious charges filed against him, and the Court may have decided to seize upon that fact as sufficient authority to refuse to enforce a Forfeiture, though it does appear such a judgment is mandatory.

The Waked Money Laundering Organization is a major player in the illicit laundering industry that exists in Panama, owning several major local legitimate businesses, including a leading newspaper, and a forfeiture judgment would give the US Department of Justice a powerful tool to attack and seek to dismantle it.