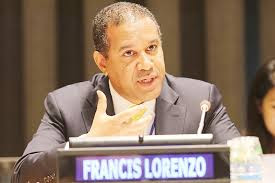 Remember Francis Lorenzo* a/k/a Frank Lorenzo ? He was one of the defendants in the United Nations bribery (FCPA) trial of Chinese billionaire Ng Lap Seng, who took the Dominica diplomatic passport he bought under the table from corrupt officials as his ticket into the UN, and subsequently tried to bribe members of the organization to designate a building in Macau that Seng planned to build as the official UN South-South Conference Center, with an annual on-site conference planned.

Lorenzo cooperated extensively with law enforcement agencies of the United States, and as a result he was sentenced to just "Time Served" after his bribery and money laundering conviction, meaning he was in prison for approximately twenty days. It did cost him financially ($250,000), but he basically escaped serving any significant prison time. He also is required to perform Community Service.