WILL ALI SADR HASHEMINEJAD FLEE THE US PRIOR TO SENTENCING, OR IS HE COOPERATING ? 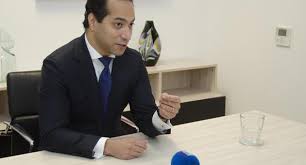 If you read carefully, you might have noticed that Ali Sadr Hasheminejad, the recently-convicted Iranian sanctions evader, and money launderer, remains free pending his sentencing, but in addition to Home Confinement (House Arrest), Sadr was ordered to have a GPS tracking device attached to his person, to follow his every movement, and to assure the Court that he will not flee the jurisdiction, to cheat justice, prior to his upcoming sentencing date.

Unfortunately, a number of high-profile defendants encumbered with GPS equipment have disconnected the device and fled the United States., and given  Sadr's reputed wealth, and probable sentence ( up to 85 years potentially), he might decide not to wait around to receive his sentence.

There is one strange issue, though; a number of sealed documents filed in the court file,  since the trial  ended, could mean that he has made the decision to cooperate with the authorities. Has he executed a Plea Agreement, which is now under seal ? We cannot say, but we will be watching for any indications that  a deal is in the works.
Posted by Kenneth Rijock at Friday, March 27, 2020