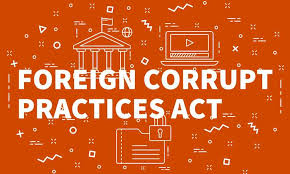 An American businessman who sought to bring a major business to the East Caribbean met a prime minister from one of those states at a conference. When the conversation turned to the investor bringing a major new industry to the country, the PM immediately told him that he would be required to make a direct, all-cash, middle six-figure payment, in US Dollars, to the prime minister, prior to filing his application.

The investor, of course, wanted no part of any bribery scheme, which is, of course, an FCPA violation in the United States. He made his foreign investment elsewhere. I bring this up here because this incident is a small part of a major investigative program now in active development at one of the world's most prominent news services, and the investor will be seen, on camera, identifying the corrupt prime minister by name. That individual belongs in a Federal Prison, serving a long sentence.

The disturbing aspect to this true story is that it could have been describing any one of several dodgy prime ministers currently holding office in the East Caribbean States. These senior officials all, to one degree or other, exercise influence over their local court system, and do not fear being charged with the solicitation of bribes or kickbacks. Unfortunately, the United States, for one political or diplomatic reason or another, so rarely indicts public officials from the Caribbean, that they feel that they are immune from the Rule of Law.

When will the East Caribbean States start cleaning up their own houses ? Until that happens, they will never be considered low-risk jurisdictions by compliance officers at North American and EU banks.