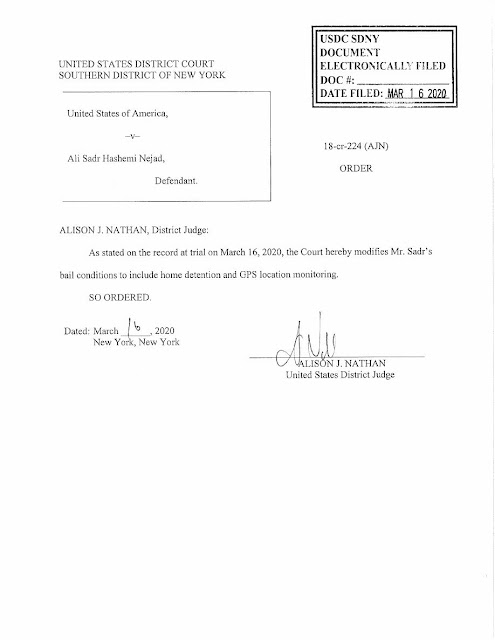 House arrest after conviction ? Say it ain't so, judge, for Ali Sadr Hasheminejad, who now faces 85 years, due to his conviction on five counts. Doesn't that make him a Flight Risk, by any interpretation of the law ? This individual is wealthy, has a history of multiple passports under several names, and he could easily cheat justice through unlawful flight to avoid prison time, relocating to Iran, which will not extradite him.   Also, he remains a Threat to Public Safety, due to his established $115m money laundering pipeline that reached from Venezuela into his native Iran. Do we really want more US banks to violate AML laws by moving his money ? Are those not the proper tests of whether a criminal defendant may be safely released on bond ?

It gets worse; he is reportedly intending to file an appeal of his conviction, notwithstanding that the evidence admitted at trial was not only clear and convincing, it was overwhelming. Should the District Court, in error, allow him house arrest while on appeal, his counsel could delay the process for a year or two, seeking repeated extensions of time for filings. All the while, Ali Sadr remains a free man. This defendant should be taken into custody at sentencing, and not allowed to be free during his appeal.

The Ali Sadr case was clearly intended to send a message that Iran sanctions evaders will be brought to justice. If Sadr is not in custody after sentencing, it sends the wrong message to others that are currently engaging in sanctions violations. That is not deterrence, by any means. Please, your honor, place this defendant, who is no friend of the United States, in custody, to demonstrate the consequences of violating America's sanctions on Iran.
Posted by Kenneth Rijock at Tuesday, March 17, 2020