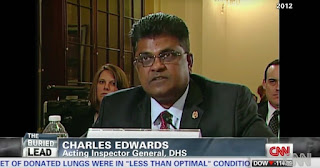 Charles Edwards, the former Acting Inspector General of the Department of Homeland Security, was indicted this week in the District of Columbia, on multiple felony counts, including Theft of Government Property and Conspiracy to Defraud the United States. Also charged was Murali Yamazula Venkata, alleged to be a former subordinate at DHS.

Edwards had resigned while under whistleblower allegations of Abuse of Authority and Violation of Ethical Standards. Ironically, a 2019 DHS-OIG report, entitled DHS Needs to Improve its Oversight of Misconduct and Discipline,* was extremely critical of agency deficiencies regarding management of employee misconduct.

The defendants, according to government reports,  stole government proprietary software and sensitive government databases, and shared the information with foreign nationals, for the purpose of developing commercial versions of the software, so that they could later sell enhanced versions, through the defendant's company, Delta Business Solutions, to US Government agencies, to the US Department of Agriculture at a profit. we note that the databases contained personal identifying information (PII) about DHS and USPS government employees.

In addition, Venkata, who remained at DHS after Edwards left the agency, was charged with Destruction of Records.