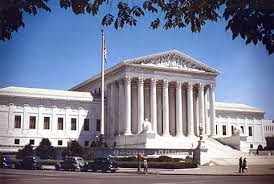 The United States Supreme Court* today ruled against two indicted defendants, who, charged with reselling stolen medical devices, and laundering the proceeds, sought to engage Miami counsel of their choosing, and pay them with assets which the US Attorney had obtained a pre-trial restraining order against, preliminary to a criminal forfeiture, to take place after their conviction.

The Defendants challenged the pre-trial freeze on their assets, in a hearing at the trial court level, which was convened to consider the legality of seizure. The Eleventh Circuit Court of Appeals held that the defendants could not challenge the factual foundation supporting the probable cause determination of the Grand Jury.

The Issue: whether indicted defendants are constitutionally entitled, at such a hearing to contest a Grand Jury's prior determination of probable cause. The Court held that the defendants have no right to relitigate the grand Jury's findings.