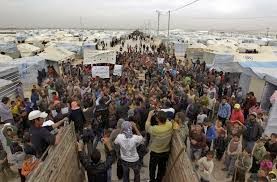 The massive exodus of Syrian civilians from their country's brutal civil war has created a humanitarian crisis in the Middle East, as neighboring countries are bursting with refugees that they cannot adequately feeds and shelter. Many well-known international charitable organizations, and NGOs, have taken up the cause, and are trying to attend to what can only be described as an emergency situation.

One can always count on those slime, who try to profit from the suffering of others, to take advantage of the good will of the global donor community. A number of suspicious NGOs have surfaced; some are newly-formed, others still have names deceptively similar to those of well-known charitable organizations, and others are not incorporated anywhere, but are simply fictitious names dreamed up by fraudsters intent upon fleecing the public.

A word to the wise, to the banking industry; vet the new charities that bank with you carefully; who are their leaders ? How long have they been in operation ? Do they have valid tax exemptions, and did you verify their status ?

I ask these questions, because I have seen a charity advertising on the Internet for donations, where one of the spokesman has at least four, and perhaps five, prior felony convictions, a long history of fraudulent conduct, and is a wanted fugitive from justice, to serve prison time. Why didn't the charity perform at least rudimentary Due Diligence on this individual ? Are they incompetent ? I consider this to be gross negligence.

This is not exactly the type of person I, as a charity, would choose to be forwarding donations to my headquarters. Trust me, the money will never end up in the Middle East, but in the pockets of the fraudster. If and when this person is taken into custody (to answer for his crimes) how will the charity ever learn how much money he took in ?

Please do not open any accounts for charities that claim to be helping Syrian civil war refugees, until you are certain that the charity is bona fide, is staffed with reputable, experienced people, and is truly aiding the refugees.
Posted by Kenneth Rijock at Thursday, February 06, 2014