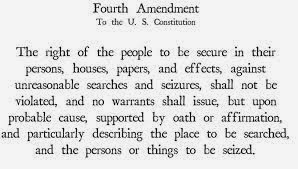 This week's US District Court decision, which held the universal NSA surveillance of domestic communications violates the 4th Amendment of the US Constitution, could, if affirmed on appeal, potentially affect the validity of money laundering convictions obtained, in part, through law enforcement use of that surveillance.

Should the decision survive, you can expect diligent defense attorneys to seek to learn whether any portion of the law enforcement investigations that resulted in money laundering convictions of their clients, resulted from NSA surveillance intelligence that was furnished to those agencies. Could a constitutional argument properly be made to exclude evidence used to convict ?

Even if the convictions are reversed and remanded, for new trials, the scope of the role of the NSA as an asset to US law enforcement, will become general knowledge, and you can expect even more pressure on the Congress to enact legislation restricting it. Let us hope that all those convicted money launderers, many of whom laundered millions of dollars in drug profits, are not released.
Posted by Kenneth Rijock at Tuesday, December 17, 2013