WHY NO ACTION IN VIKTOR BOUT'S CASE ? 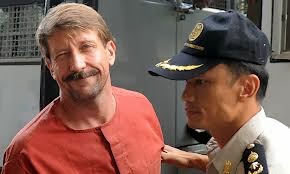 On November 7, the Second Circuit Court of Appeals, acting upon Viktor Bout's letter, in which he asserted that he did not want to pursue his appeal further, ordered as follows:

The Court also issued its Judgment and Mandate on that date. Bout's new counsel has not taken any action to date, notwithstanding the numerous Russian media statements about taking his case to the Supreme Court of the United States, both to obtain a new trial, and to ease the conditions of his incarceration. If they were waiting for the Richard Chichakli case to go to trial, before moving forward, that case ended in a jury verdict against Chichakli.

Considering that there have been numerous allegations that new and compelling evidence will be revealed, we anxiously await the Supreme Court petition.
Posted by Kenneth Rijock at Sunday, December 29, 2013