HAVE ANY OF YOUR LEBANESE EXPAT CLIENTS DEPOSITED EXACTLY USD$25,000 LATELY ?

Do you have any Lebanese expats in your client base ? Of course you do, but have any of them deposited exactly $25,000, perhaps in cash, this year ? If so, you may have unwittingly participated in laundering a $25,000* survivor payment, made by Hezbollah to the immediate family, or next of kin, of a Hezbollah agent, killed in action in the Syrian Civil War, fighting on the side of the Assad Regime.

The payments, which are in essence hush money, are given to ensure that the relatives of the dead do not publicly mourn their dead, and thereby expose the true extent of Hezbollah involvement in Syria. Though it is estimated that approximately 300 Hezbollah fighters have been killed in combat in Syria, the true figure may be substantially higher, and Hezbollah is taking a lot of heat in Lebanon, from Sunni and Christian political factions, over its deployments there. It does not want any more publicity about the matter, and widows and children of deceased fighters are being silenced through the payment of what is actually blood money.

If you do find such a deposit, you should notify your compliance officer or MLRO forthwith, so that an enhanced due diligence investigation can be initiated, and, if necessary, a SAR filed. 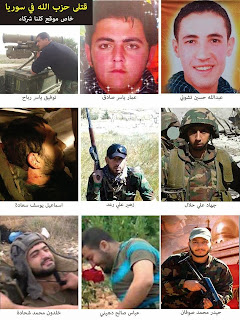 There are photos of 90 deceased Hezbollah fighters on the Internet; we show some of them here to demonstrate the extent of the organization's involvement in the Syrian conflict. 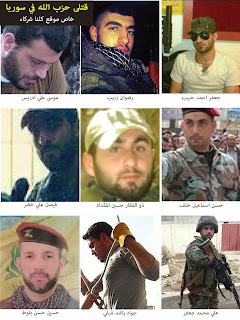