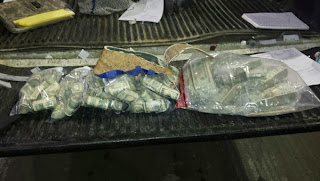 Officers from Alabama's 17th Judicial Drug Task Force seized $386,900, which was in the possession of three Mexican nationals traveling on a Mexico-bound passenger bus on I-20/I-59, near Cuba, Alabama, which is on the state line with Mississippi. The individuals transporting the cash, which was found in their suitcases after a K-9 unit located them, denied ownership. They were taken into custody.
Posted by Kenneth Rijock at Saturday, December 14, 2013