YET ANOTHER INDICATOR FOR RAISING COUNTRY RISK ON IRAQ 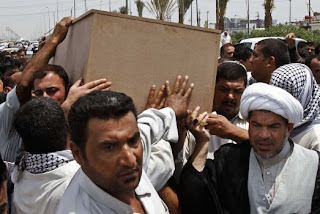 Just when you think the country risk situation in Iraq could not get any worse, it does. An Iraqi Shiite fighter, killed in the Syrian civil war, was repatriated through Iran, and buried in Basra, as seen in the photograph above. Apparently there are a number of Iraqis engaged in Syria, in support of the Assad regime. The fact that Iran was involved in the return home of the body seems to confirm reports that it is coordinating the placement of foreign fighters in the Syrian civil war.

If Iraq continues to demonstrate its cooperating role with Iran, whether through permitting Iraqis to participate in the Syrian conflict, on the side of the regime, in assisting Iran to evade global sanctions, or by allowing arms to overfly Iraqi airspace, en route to Damascus, it will soon approach a level of Country Risk, in 2013, that will disqualify it for any foreign investment, or financial relationship that involves the extension of credit. If it draws any significant Iran sanctions violations, that will be the last straw.