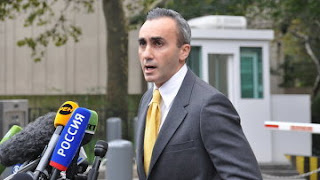 Albert Dayan, the attorney for convicted arms trafficker Viktor Bout, who has taken an appeal from his conviction and sentence,  has made some unusual comments on the merits of the brief filed by the US Attorney's office. Whilst the ethics rules do not appear to prohibit attorney comments on pending appeals, as the case has already been adjudicated, it is strange that he has chosen to criticize the Government's arguments in the media.

Basically, Bout's counsel has stated that the US Attorney has admitted that there were errors committed during the investigation and extradition, and at trial, but is claiming that such errors are harmless error, meaning that the conviction should not be set aside. Dayan claims that reversible error was committed.

He is free to assert this argument in his Reply Brief, as he may very well do, but claiming that the US Attorney's brief shows that the government is "desperate," seems either unprofessional, or pandering to Bout's many Russian supporters, who firmly believe that his arrest and conviction was purely political. When the Reply Brief is filed, we shall cover it in detail.
Posted by Kenneth Rijock at Monday, May 13, 2013