WHY IS THE ILLICIT AFFAIR BETWEEN MALTA'S JUSTICE MINISTER AND AN OPPOSITION MP OUT OF BOUNDS ?

Whilst the Maltese press is covering, in detail, the controversy over Rosianne Cutajar's arrogant defamation suit against a former senior Labour leader, the overt affair between Minister of Justice Edward Zammit Lewis and opposition MP Kristy Debono remains forbidden fruit for journalists in Malta. We wonder how his wife copes with the situation; it is common knowledge.

Considering the fact that giving  new Labour Party initiates, who are mostly married, access to prostitutes, as a part of their welcome into the party, EZLs open affair should not only be out of bounds for media, it should be openly discussed, given his current untenable political status, and the public's hatred for him, for his relationship with Yorgen Fenech, accused of orchestrating Daphne Caruana Galizia's assassination. Remember Debono's no-show job, arranged by EZL ?

Remember also that communications between YF and Dianne Izzo included the tidbit of him making fun of EZL for his longtime extramarital adventure. The photograph below was taken by Lewis; That's his wife on the right, Dianne Izzo on the left. 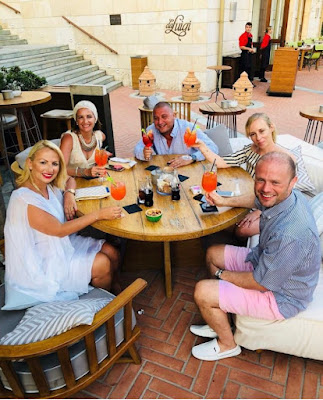 Perhaps the Maltese voters, who are overwhelmingly Roman Catholic, might want to take a closer look at the obligation of Fidelity and Loyalty to a Spouse, imposed upon them by their faith, in the Ten Commandments, when casting their votes in 2022, but it's not solely about infidelity; it's all about Abuse of Power. An Opposition MP (Debono) getting paid for a phantom job, protected by a senior minister from the opposite side of Parliament. Making it look more decent doesn't make it so. Yes, it is not about extramarital sex between two cheating adults, behind their families' backs; it's about Abuse of Power; let that sink in.