A Federal Magistrate has entered an Order Directing Discovery, in the second case filed on behalf of the beneficial owner of Malta's Pilatus Bank (Alpene Limited), against businesswoman Elizabeth McCaul, regarding a dispute with the Republic of Malta over the revocation of the bank's license by the European Central Bank. The first Discovery case, filed in US District Court in New Hampshire. against the Competent Person, who was supervising the bank's winding down, was dismissed for failure to comply with specific Federal statutory requirements. We have been critical of that case on this blog, because it was filed by a Miami attorney, with local counsel, and sought to move the case forward after the time for service of process had expired, and dismissal had already occurred. 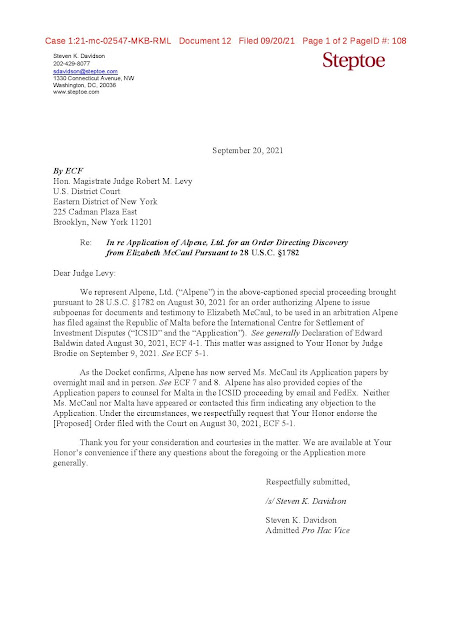 This second case has been unopposed to date, but there may be issues regarding Service of Process. The order was entered on September 20, 2021, as well as a Motion to Compel.  We are closely monitoring this case, and shall update our readers on all developments as they occur.