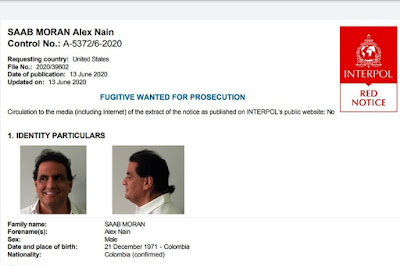 The following text is an extract from today's information about ALEX NAIN SAAB MORAN, extradited from Cape Verde to Miami this week. it appeared on the website of the United States Attorney's office for the Southern District of Florida. He reportedly had a First Appearance before a US Magistrate, and his Arraignment has been scheduled for November 1, 2021.

Specifically, on July 25, 2019, Saab was charged along with Alvaro Pulido Vargas, aka German Enrique Rubio Salas, 55, also a Colombian citizen, in an eight-count indictment with one count of conspiracy to commit money laundering and seven counts of money laundering. The indictment alleges that beginning in or around November 2011 and continuing until at least September 2015, Saab and Pulido conspired with others to launder the proceeds of an illegal bribery scheme from bank accounts located in Venezuela to and through bank accounts located in the United States. According to the indictment, Saab and Pulido obtained a contract with the Venezuelan government in November 2011 to build low-income housing units. The defendants and their co-conspirators then took advantage of Venezuela’s government-controlled exchange rate, under which U.S. dollars could be obtained at a favorable rate, by submitting false and fraudulent import documents for goods and materials that were never imported into Venezuela and bribing Venezuelan government officials to approve those documents. The indictment alleges that the unlawful activity was a bribery scheme that violated the FCPA and involved bribery offenses against Venezuela. It also alleges that meetings in furtherance of the bribe payments occurred in Miami and that Saab and Pulido wired money related to the scheme to bank accounts in the Southern District of Florida. As a result of the scheme, Saab and Pulido transferred approximately $350 million out of Venezuela, through the United States, to overseas accounts they owned or controlled.