Suheid Yousef, whose father is Hamas co-founder Sheikh Hassan Yousef, has publicly broken with the terrorist organization, and fled the Middle East, due its systemic corruption. He described Hamas to media, during a television interview, as "a racist, terror organization" which is basically working for Iran, and not for the goal of Palestinian independence.

Yousef, who until very recently was with Hamas' so-called "Political Wing" in Turkey, described an advanced Hamas intelligence collection system in place in that country, with the assistance of the Turkish government, with advanced listening equipment that spies upon Palestinian telephone conversations in the West Bank (Judea & Samaria), especially PA leaders, as well as Israelis in the State of Israel. This information is then sold to Iran, which provides financial support to Hamas. 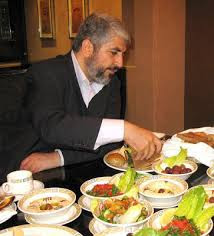 The most compelling statements that Yousef made were about the corrupt personal conduct of the Hamas leadership:

(1) Hamas leaders live a life of privilege , while the average Gazan, unemployed penniless, and struggles to survive each day. Hamas' senior leaders live in "fancy hotels and luxury towers, their kids learn at private schools, and they get very well paid by Hamas. They get between four and five thousand dollars as month; they have guards, swimming pools and country clubs."

(2) Perhaps the most outrageous statement made by Yousef, taken from personal observations he made in Turkey: "They ate on the best restaurants. I would see them eating at places where one course costs $200." The average family in Gaza has $100 per month for food, and lives on Public Assistance supplied by the West, while the corrupt leadership lives a life of luxury.

He is the second son of the Hamas foundser to fleee the terrorist organization.Yousef's brother,  Mosab Yousef, left Hamas in the late 1990s, and converted to Christianity. He stated in his autobiography that he worked undercover for Israel's security services, against Hamas, prior to his defection.

The information supplied by Suheid Yousef means that a new examination of the Turkish Government's role in providing support to Hamas is necessary. Turkey has stated that it forced most Hamas agents to lave the country, but since it is operating a sophisticated listening post there, with Turkish support, financial transactions with companies operating in Turkey, and indeed Country Risk, must be reassessed, for risk management purposes.