The Supreme Court of Florida has determined that it "lacks jurisdiction" to entertain a petition filed, seeking to review Willie Lynch vs. State of Florida, A District Court of Appeal decision that held the failure of law enforcement to deliver non-matches, obtained in a facial recognition software search that identified a defendant in a narcotics sale case, was not error under Brady vs. Maryland,  a US Supreme Court case that requires defense attorneys to receive any evidence which might tend to prove the innocence of their client. The test of Brady is whether the result of the trial would have been different, had defense counsel received the evidence.

Florida's highest court ruled that the Lynch decision did not conflict with another decision of a District Court of Appeal in the same question of law. Defense counsel had submitted Florida case law but the Court  ruled that any conflict asserted was not "express and direct." This means that the decision in Lynch remains the law in Florida, which states that non-matches, which are the result of a facial recognition identification search in a criminal case, need not be submitted to defense. 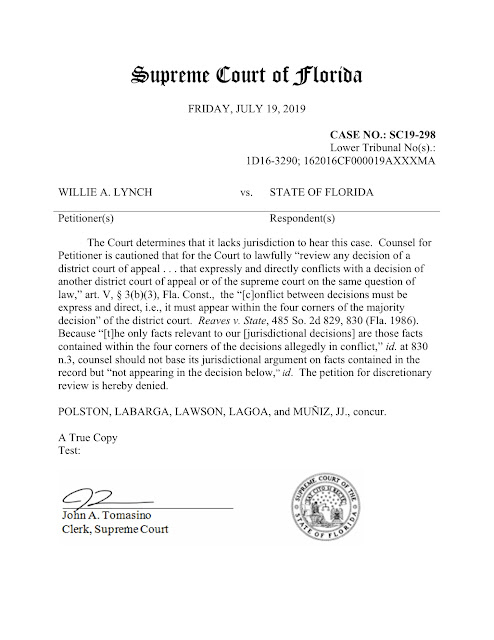