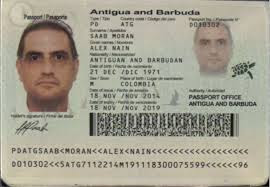 In the aftermath of the fallout surrounding the American money laundering indictment of Alex Nain Saab Moran, the Antiguan Economic Envoy, who holds a diplomatic passport from Antigua & Barbuda, the government is desperately trying to distance itself from the scandal. Saab is a Colombian national of Middle Eastern extraction; in fact, when his accountant and auditor were arrested in Colombia, and Saab was a known fugitive from justice in Colombia,  the Antiguan government was still singing his praises.

In a thinly-disguised press release appearing in local media, purporting to originate from the Foreign Ministry, but actually issued by Maurice Merchant, the press agent in the office of Prime Minister Gaston Browne, the fact that Antigua is not specifically named in the indictment is employed to allegedly show that Saab passed no illicit financial transactions through its banks, and that he was not really involved in Antigua. Nothing could be further from the truth.

In truth and in fact, the SAAB indictment alleges that the defendant, and his partner, Alvaro Pulido Vargas, also a named defendant in the criminal case, laundered the proceeds of crime through US banks, especially those located in Miami, and the money then went onward into tax havens abroad. Considering that Saab owned an offshore bank in Antigua, and also moved money through one of Antigua's largest locally-owned banks, we must assume that Antigua is one of those unnamed offshore financial centers.

Additionally, where Mr. Merchant claims Saab had only a minor connection with Antigua, perhaps he would care to explain how A & B Prime Minister Gaston Browne publicly stated that Saab was a "close personal friend," and that he was destined to assist Antigua to develop to its total potential. Antiguan businessman, with Browne's approval, visited a factory in Venezuela said to be owned by Saab.

It was PM Browne that named Saab Economic Envoy, and sold him that diplomatic passport, when he was already listed as a high-risk individual in the databases used by the world's financial institutions, and for due diligence purposes. Does this mean Antigua does not check out foreign applicants whom is sells diplomatic passports to for cash ?

I am afraid that it is a bit too late from Browne to claim that Saab was only an acquaintance; We wonder just how the Saab indictment reflects the level of ongoing US law enforcement investigations into money laundering and official corruption in Antigua.
Posted by Kenneth Rijock at Tuesday, July 30, 2019