Cashiered from his four ministerial posts, for rampant corruption which has been previously described in painful detail, on this blog, the disgraced politician, Asot Anthony Michael, has crossed a red line, and uttered threats against his own constituents, the people of Antigua & Barbuda at large. His fall from grace has been swift, but this latest incident renders him unfit, not only for public office, but even to continue to reside in Antigua for any purpose.

MP Michael, who initially stated that he would resign his seat in Parliament, but later reneged upon his promise, repeatedly stated in a public forum,where he was was heard by witnesses to threaten, that "if any Antigua and Barbuda Labour Party (ABLP) member is arrested by the Opposition, that there will be blood flowing in the streets." This is a direct threat to the public safety, and since the statement was made outside of Parliament, he cannot hide behind immunity in any form or manner. His arrest, as a public enemy who has made obvious death threats, should have occurred already. The Royal Police Force of Antigua & Barbuda must take him into custody, before anyone gets hurt by the "Bagman of Antigua" who early political career he wants the public to forget. 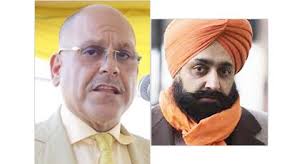 First of all, it is not the Opposition that will arrest Michael, it will be law enforcement, and only after an indictment is filed against him. Second of all, he is the guilty one, not any of the other ABLP ministers, so he may not hide behind his political party; they should expel him forthwith.

Antigua, the world is laughing at you; reform your elected official leadership now, or be relegated to the dustbin of history, while the other East Caribbean States move forward, using their expanding CBI program income to create modern economies, while investors avoid Antigua, due to the taint of continuing scandals that permanently stain the country's image.