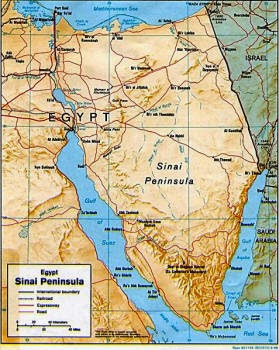 The security situation in Egypt has deteriorated of late, and it appears that it will get worse. The attacks upon Egyptian military and police in the Sinai Peninsula have increased exponentially, and the perpetrators are known to be radical insurgent groups, trained by Hamas, armed with stolen Israeli weapons and equipment, and deployed from Gaza, using the cross-border tunnels not destroyed by Egypt.

In response, Egypt has Instituted a State of Siege in the Northern Sinai, closed the only crossing with Gaza, and terminated its post-war role, as intermediary between the Palestinians and Israel, due to its belief that Hamas is behind the cross-border attacks. It is also planning either a no-go zone at the frontier, or a wall, similar to the one erected by Israel, on its border with the West Bank, and has asked the West for assistance in counter-terrorism operations.

On Egypt's western and southern borders, radical insurgents, coming from failed states locked in conflict with their organizations, are entering the country at will, through the porous border. Libya's civil war threatens to spill over into Egypt.

In light of the foregoing, and additional non-public facts, it is suggested that you immediately raise Country Risk for Egypt, and educate your bank clients as to the increasing level of risk these insurgent activities pose to Egyptian stability, and continuity of its present government.
Posted by Kenneth Rijock at Tuesday, October 28, 2014