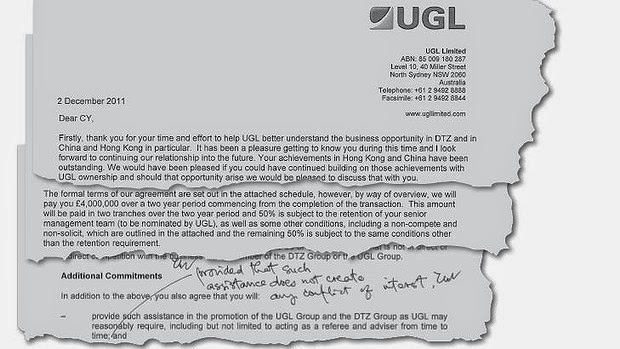 Australian media is reporting that the Chief Executive of Hong Kong, CY Leung, who was appointed by China (and not elected by the people he serves), quietly received £4m, paid after he took office, under an agreement that indicates he was going to provide "assistance" to the paying company. The document spelling out the covert arrangement, which allegedly was not made public, nor disclosed as required by law, can be seen above. We stress that it has not yet been authenticated, though the information contained therein has been widely reported in Australia.

The letter is apparently dated after the executive announced that he was a candidate for Hong Kong's highest office, then an appointed position. What effect this information will have upon Hong King's Occupy Central Opposition is uncertain, but you can rest assured that it will further galvanize the on man-one vote democracy movement. This individual, specially chosen by Beijing to rule Hong Kong, is no cleaner than the corrupt PEPs in Mainland China.