AN ERA COMES TO AN END 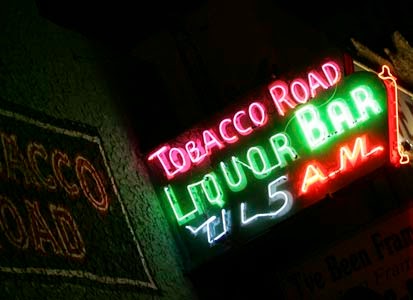 Tobacco Road, the oldest and best bar in Miami (100+ years), is closing at the end of this month, as the Brickell Avenue financial district continues to expand into adjacent South Miami Avenue. The Road was where, in the days when drug traffickers, their narco-lawyers and their money launderers, imbibed next to burly Customs officers and US Attorneys, who were dedicated to bringing them down. It was the real Miami Vice, and was featured in a number episodes of the television program. I actually had my law office in the building for several years in the 1980s, and my column, named Mr. Manners, appeared in the menu in those days.

Management is seeking to reopen it, with much of the bar's existing character, elsewhere, but the onetime speakeasy, frequented by Al Capone when he lived in Miami, will soon be gone forever. It will be missed.


Note: That shadow, painted on the front of the building, is of "Doctor Feelgood," a local character who, complete with Courvoisier hat, remained a fixture at the establishment, as it went from being a sleazy hangout, to a destination for Miami's professionals. Doc, who passed away, years ago, from the effects of alcohol and drugs, was the only holdover from the bar's dark (pre-1980) past, was rumored to have served a long prison sentence for killing his wife, when he discovered her being unfaithful. Here's hoping that his immortality survives in the new location.
Posted by Kenneth Rijock at Thursday, October 02, 2014