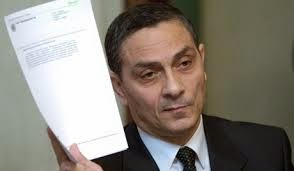 The newly-appointed attorney for Viktor Bout associate Richard Chichakli, convicted of sanctions violations, and engaged assisting his client with previously-filed post-trial motions, has notified the Court that his client wishes to raise two additional grounds for, alternatively, a new trial, or to set aside the verdict. The thrust of Chichakli's arguments is that he failed to receive a new trial.

The two issues that were raised this week in a letter counsel sent to the trial judge:

(1) That classified information was presented to the court, by the US Attorney, and access was denied to both standby counsel, and the defendant. This information materially prejudiced the Court against the defendant, therefore denying him his right to a fair trial. Sources with personal knowledge of Chichakli and Bout's activities during the past two decades advise that they were engaged in operations, in support of the American intelligence community, as well as illegal arms trafficking into conflict zones. Could negative information, supplied Ex Parte, have poisoned the mind of the Court against the defendant, and what was that information ? That is a strong statement to make.

(2) Chichakli requested that Viktor Bout's trial judge, Shira Scheindlin, be called as a witness in his case, specifically to testify about the credibility of a principal prosecution witness in the Bout case, DEA Special Agent  Robert Zachatriasiewicz. Chichakli alleges that that the trial judge in his case failed to rule on this request.

Is Chichakli merely grasping at straws, in a futile effort to gain a new trial, or is he placing additional issues in the record, for appellate purposes ?  We note that the Court has, to date, failed to make a ruling, disposing of all post-trial motions, and sentencing has been delayed for that reason.

We shall continue to update readers on all developments as they occur.
Posted by Kenneth Rijock at Wednesday, March 26, 2014