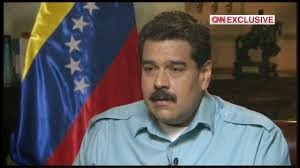 After months of rumors, an investigation into the family background of Venezuelan leader Nicolas Maduro, has concluded that he is not eligible to serve as his country's president, pursuant to Venezuelan law. Maduro, it has been established, was born in Bogotá, Colombia, and his family moved to Venezuela, for the first time, when he was two years of age. The law requires that only native-born Venezuelans are eligible to serve as president.

This raises an interesting issue: Since Maduro was the late Hugo Chavez' personal choice to succeed him, reportedly due to Maduro's longtime loyalty to Cuba, rather than other, more independent Venezuelan leaders, did not Chavez know about Maduro's ineligibility, or did he deliberately ignore it ?

More than one million protesters took to the streets of Venezuela on Saturday, voicing their fierce opposition to the Maduro government.  Earlier in the week, student protestors clashed violently with police. The Armed Forces of Venezuela, which have, to date, failed to choose sides in the domestic dialogue, may now seek to enforce the law, and remove Maduro from office. Opposition congressmen may also seek political relief, or seek a remedy through the corrupt court system. The exact impact of Maduro's ineligibility is not yet known, but it could result in a regime change.

Whatever happens in the short term, the issue of Maduro's legitimacy further erodes his power, and compliance officers updating Country Risk on Venezuela would do well to adjust their calculations accordingly. Frankly, any compliance officer who fails to recommend against any new financial exposure in Venezuela has lost touch with the reality on the ground. Now the time to mitigate any and all existing financial exposure, to, as much as possible, reduce it to zero, and to redline any new business whatsoever, until further notice.
Posted by Kenneth Rijock at Sunday, March 23, 2014