ALL STANFORD BANK (SUISSE) FUNDS TO BE RETURNED TO VICTIMS 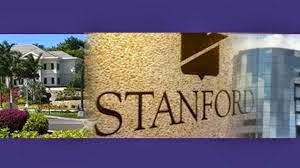 The Attorney General of Switzerland has announced that a fine, for aggravated money laundering, has been imposed upon Stanford Bank (Swisse) AG, Allen Stanford's European entity, in the amount of one million Swiss Francs. The funds have been frozen for the past five years, while an investigation was conducted.

Additionally, between six and nine million Swiss Francs will be set aside for pending claims of victims. The reported 200m SF balance will be eventually returned to the victims, through the American proceedings.

The Swiss Government announced that US authorities will receive the banking documents, and transcripts of hearing conducted during the Swiss investigation, which has now concluded.  A recent US Supreme Court decision has apparently paved the way for Stanford victims to further advance their claims.
Posted by Kenneth Rijock at Tuesday, March 11, 2014