BO GUAGUA to BO KUANGYI; ANOTHER CHINESE PEP CHANGES HIS NAME, TO HIDE IN PLAIN SIGHT

If you were wondering whatever happened to Bo GuaGua, the playboy son of two prominent corrupt Chinese PEPs, both convicted, and presently serving time, he's currently attending law school at New York's Columbia University. Bo is believed to have control of at least a portion of his parents' illicit wealth, and has declined to return to China since their arrests. his expensive British, and American, private schools, and later university, education, (Harrow, Oxford, Harvard) cost far more than his family's reported income.

Apparently, a graduate school degree in Boston was not enough for him; now he needs a professional degree as well. Or is he just using the student status to avoid a probable prison term in China, perhaps, for corruption ? Anyway, since the fact of his attendance became public knowledge, he has conveniently changed his name to Bo Kuangyi, which he claims is his grandfather's name. My hat goes off to those staff members at Columbia, and other universities, who allow the "princeling" children of dirty PEPs to hide behind new identities, while they freely enjoy spending their parents' bribe and kickback money* on wine, women & song and allow them to live in a free society, while their parents clamp down on dissent, taking money all the while. 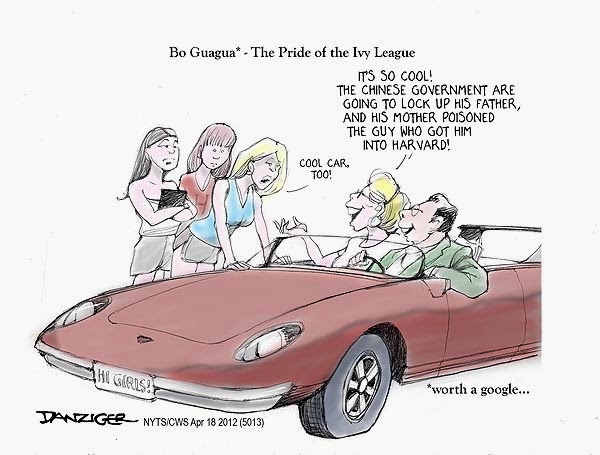 Many media sources are now reporting his new alias; hopefully, compliance officers at US banks are reading this, and will decline to open accounts for him. Do not forget that his mother poisoned a British businessman, and threatened other Brits with dire consequences, if they disobeyed her, and thereafter had the temerity to visit China. Please send this law student back to China, where he can face the music, or at least give up his family's ill-gotten gains, as a warning to others.
___________________________________________________________________
* Bo's parents are believed to be part of a covert group of high-ranking government officials who illegally harvested human organs from Chinese nationals opposed to the central government, which could account for a large portion of the family's reputed overseas wealth.
Posted by Kenneth Rijock at Wednesday, March 26, 2014