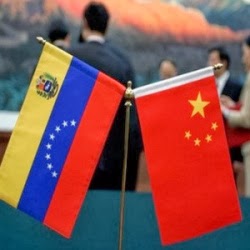 Some of the most important provisions of China's new $5bn loan program for Venezuela are not being disclosed to the public, but they could facilitate the widespread evasion of current sanctions laws. The $5bn funding, part of an ambitious $20bn loan program, has some extremely disturbing strings attached.

In exchange for this new infusion of funds into the Venezuelan Government, China is receiving the right to have complete control over a portion of Venezuela's oil industry. It will be taking over certain as yet unspecified active oil field operations, with the right to extract crude, and to ship it out, on the high seas, to any destination or customer of its choice. Some Venezuelans have opined that the Maduro government has surrendered a portion of Venezuela's sovereignty, especially the position of PDVSA, the national oil agency.

This agreement means, in plan language, that China will be able to:

(1) Transport and deliver oil to jurisdictions designated or sanctioned, by the United States, the European Union, or even the United Nations.

(2) Deliver oil, on behalf of a sanctioned country, such as Iran, thus cleverly evading the letter of the law,  as it would be a Chinese, not Iranian, sale, and settle up with Iran later.

(3) Use oil shipments, to countries in dire need, for diplomatic gain, as Venezuela has done for some time with the Caribbean island republics.

Additionally, the presence of Chinese oil tankers in the region would certainly increase China's footprint, and influence upon, Latin America and the Caribbean. Given China's historical heavy-handed approach to the South China Sea, can we expect to see its navy in the area, protecting its shipping ?  We cannot say, but Venezuela may have opened the door to the Caribbean, to increase Chinese influence.