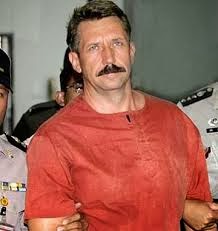 Reports from Russia indicate that convicted arms trafficker Viktor Bout, who lost his appeal to the Second Circuit, has requested that the Government of Russia cover the legal expenses of a Petition for Certiorari to the United States supreme Court, and for representation in his quest to reduce the severe conditions of his confinement. Bout is currently serving his 25-year sentence in a high security setting, where communication with the outside world is deliberately restricted. Questions have been raised as to why he was placed in a controlled environment specifically designed to prevent terrorists from passing instructions to their confederates, for there are no such allegations in Bout's case. Whether this type of confinement constitutes cruel and unusual punishment is an issue raised by his counsel.

Alexey Binetsky, his new Russian attorney has stated that the costs will be approximately $1.5m, and that he needs a retainer of $250,000, to engage the firm he has selected. Most Supreme Court observers believe that he has only a small chance that his case will be heard, especially on his principal issue, whether his case constitutes Vindictive Prosecution. He has no appeal as a matter of right, only the right to file a petition, asking that the Court accept the case.
Posted by Kenneth Rijock at Monday, November 11, 2013