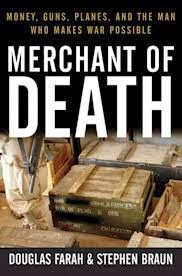 Douglas Farah, A prominent journalist who is the author of Merchant of Death, which is a profile of Viktor Bout, has moved to quash a defense subpoena to testify in the criminal case of Bout associate, Richard Chichakli, whose trial is presently in progress in New York City. Chichakli had previously sought to have Farah's book, and other media material, admitted at trial, but the trial judge denied his motion, on the grounds that all the material was hearsay, on November 18, 2013.

Mr. Farah's attorney, in his memorandum of law, asserted that his testimony, and any written materials that he may have, are barred by the qualified reporter's privilege that exists under Federal law, which only requires journalists to testify under strictly limited circumstances. Generally, the First Amendment to the US Constitution, and the New York State Shield Law, bar him from testifying in a court proceeding.

One wonders why Mr. Chichakli bothered to subpoena Mr. Farah, due to the Court's November 18th ruling which demonstrated the Court's position on the material, as hearsay; the Court will most likely grant the Motion to Quash. Is he seeking issues for a possible appeal, or is he just fixated on his OFAC designation, and wants the jury to understand his belief that it was improper ?