A number of instruments, captioned "Safekeeping Receipts," that altogether total a sum in excess of two billion US Dollars ($2bn), are being represented, by certain parties in Miami, to be genuine financial instruments issued by Banco Industrial de Venezuela, a government-owned financial institution, and are being represented as redeemable in Venezuela, at their respective large face values. You can see one of them below; they were made available to me for the sole purpose of ascertaining whether they are legitimate. I conclude that they are fraudulent documents, rife with defects and flaws, and are not legal obligations of the Banco Industrial de Venezuela. 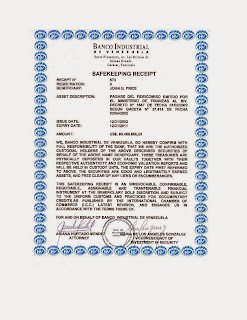 The trouble with the documents:

(1) The document is written in English, notwithstanding that Spanish is the language required on all official documents in the Bolivarian Republic of Venezuela; First Red Flag.

(2) The grammar, punctuation and spelling are abysmal; I suspect that it was translated from the original, but whoever performed the translation was not a native English speaker; Second Red Flag. 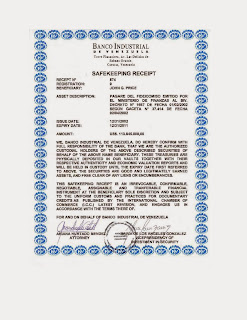 (3) They have all expired, which leads the reader to conclude that, even if they were, by some stretch of the imagination, legitimate, they are no longer valid and enforceable; Third Red Flag.

(4) Note that one of the purported signatories, Maria de Los Angeles Gonzalez, was charged, in the US, with receiving bribes, to direct business to a specific company. Fourth Red Flag.

These "instruments" are obviously worthless, and it is hoped that no private investors in America have purchased an interest in them, for any attempt to redeem them would not only be fruitless, but could very well result in the applicant's arrest and incarceration in Venezuela, on criminal charges, for seeking to defraud a government financial institution.  Fraudsters in possession of these bogus documents could also seek to post them as collateral, and obtain loans from US banks, or private lenders, so I am posting all the copies in this article for your information, directing special attention to compliance officers at banks in South Florida.


The documents are reportedly in the possession of an individual, who is a Pakistani living in Miami, holding a Canadian Passport, named Karim Pirani, and who claims that they are legitimate obligations of the Banco Industrial de Venezuela. Mr. Pirani's photograph appears in this article. He allegedly has already tried once before, unsuccessfully, to cash in the documents in Venezuela. Please consider this fair warning to investors, or professionals, who may be approached, to purchase, or to assist in redeeming, these bogus documents, to avoid any involvement, at all costs, as they cannot be legitimate obligations of Venezuela. 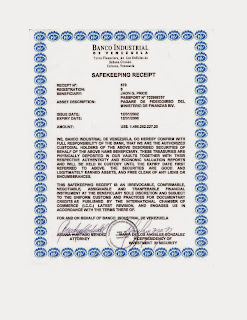 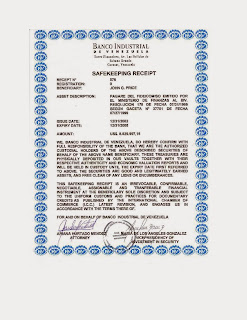 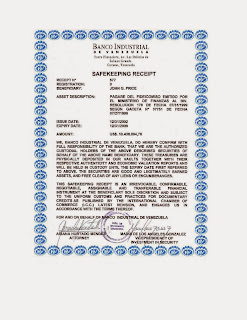