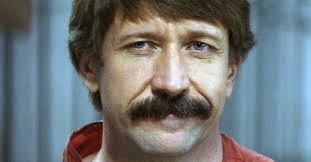 Viktor Bout's attorney, Albert Dayan, has sent a letter to the Second Circuit Court of Appeals, withdrawing his request for a Rehearing, or, in the alternative, a Rehearing en Banc, meaning before all the judges of the circuit. He attached an email, appearing to be from Viktor Bout, directing him to drop the proceeding.

Most of the Russian press, but not the Western media, and quoting Alla Bout, Viktor's wife, has reported that Mr. Bout is discharging Mr. Dayan, and is to be represented by Russian attorneys, who plan to engage new US counsel.

There is a small problem, he has no more appeals as a matter of right, and he cannot refile the En Banc request, as the filing is barred by time. Where are they going with this ? Other than a Petition for a Writ of Certiorari to the US Supreme Court, which has little chance of being heard, he has no other avenues for relief. Are they looking for a political solution ? We cannot say, but when his new American counsel is designated , we shall follow up on this matter.
Posted by Kenneth Rijock at Tuesday, November 05, 2013