RUSSIAN BOMBER WAS REPOSSESSING ARMS NOT PAID FOR BY VENEZUELA 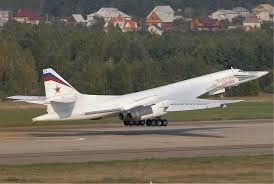 For all you armchair speculators who theorized that the Russian strategic bombers that paid a recent visit to Venezuela and Nicaragua were delivering arms and ammunition for the Maduro government, think again. The aircraft were actually picking up military equipment, sold by Russia, that had not been paid for by Venezuela, a form of legal repossession by a creditor, if you will.

This is but one more indication that Venezuela's government is rapidly becoming insolvent, meaning that it cannot pay its debts as they come due. In an effort to win votes, it has subsidized prices of consumer goods for the poor, and in doing so, has failed to pay money owed to the private sector, and drained large portions of public accounts, solely for political gain.

The question everyone has been asking is: how long will it be before the Venezuelan economy implodes, bring with it widespread food shortages, out-of-control unemployment, massive closing of small businesses, and a total absence of US Dollars for imports ?