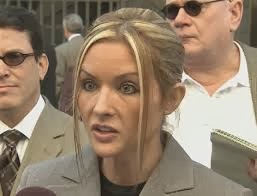 Kimberly Rothstein, the so-called trophy wife of convicted master Ponzi schemer/attorney Scott Rothstein, was sentenced today to eighteen months in Federal Prison, for secreting some of her most valuable jewels, and having them sold off secretly, to avoid their confiscation by IRS, or the court-appointed receiver, seeking to assemble assets to reimburse Ponzi victims. Thus new disclosure could affect Mr. Rothstein's ability to obtain a reduction in his present 50-year sentence.

For the first time, the defendant stated that her husband ordered her to hide the jewelry; she also
revealed that he had been physically ands emotionally abused by Scott Rothstein. Mrs. Rothstein faced a maximum sentence of five years, but she rendered Substantial Assistance in a related case, where the defendant pled guilty before trial, most likely because she will willing to testify against them.

She did not get the customary delay in surrendering herself to begin serving her time, given to most defendants who receive short sentences, probably because she had delayed her sentencing for several months, until the other case was ready for trial.

Is eighteen months insufficient for someone who enjoyed the fruits of her husband's billion dollar Ponzi scheme for several years, and conspired to hide assets from the victims, even going so far as to tell her imprisoned husband to lie under oath about the disposition of the twelve carat diamond ring ? I will let you be the judge.